If this is your first experience with my 5e homebrew then I suggest you check out this link, instead of this trimmed down version. Especially if you are interested in any of the rational for my choices. But if you just want to dig into the pile of rules that this post is then proceed. I say that because the following is everything in a list.

The psionics class and all of the homebrew goodness right in a row with all of the creator explanation taken out. If you want the rational for why I chose certain powers and abilities for the individual disciplines you can check out. Now onto Psionics! Psionics!

The Lingo for my 5e Homebrew Psionics for D&D

First let us break down the lingo that I use to separate Psionics from the other classes without making up complex rules sets of questionable balance.

Psychic Well and Drams: Psychic well is the area in which the character’s psionic potential, that fuels their powers, resides. How one constructs their well is the basis for their origin story.

Origins: Every person with a special skill set comes by it in a unique way. But over the thousands of years a pattern of stories develops. In a fantasy setting that pattern includes such events as;going to a monastery to train for years, marauders destroy everything of value in their life and their rage kills the marauders, or a burning desire to not be eaten by a predator.

When the will of the character enacts the powers they consume Drams to activate it. Similarly to taking a draught from the well, a dram, a drink. This fills the psychic conduits(circuitry) in and around the character’s body activating the power.

Constructed through intuition and desire the circuits are activated through the will of the psionicist as they move the arcane energy along the unique paths within their body and energy matrix.

It is very similar to electricity moving along a path within a circuit board, sugar being carried by the blood to energize systems, or water and nutrients flowing through a network of mycelium or roots to produce a specific effect.

What makes the Psionics circuits different then the biological and technological is that these are constructs of magic that form additional pathway within, and without, the body that change the overall energy patterns to something completely different. This results in arcane energies moving through the system to manifest extraordinary effects.

Powers: How to use the spell list for psionic powers? Focus on the mechanism, not the name of the spell. The names can be changed to reflect a more thematic in game rational for a particular discipline to have their power list. An example that comes to mind is the Relativist (discipline of time and space) They have a spell list that comes from every full caster’s list. They have druid spells that alter how a plant grows, they have cleric spells associated with healing, and they have spells dealing with weight, time, teleportation, and movement.

Manifest: For all in game mechanics the powers, work exactly as stated in the spell rules. A Psionics known powers are as per sorcerer, components are still required for certain powers to work. For example, if a spell requires a 100 gp gem, and it is consumed by the casting of the spell normally, than there is a space in the psychic circuit that destroys the gem when the gem is placed there and the power is activated. Otherwise the spells lose their balancing factor of rare or costly components when converted to powers.

Skills: Choose two from Psionics (Arcane), History, Insight, Medicine, Perception, and any additional skills added to the list from your chosen discipline.

We have gone through the the initial class differences for the starting skills and saves. Now let us continue on to the general class advancement and the more specific powers of each discipline.

I have gone with base names that describe what they are without seeming too science based but I did not want to swing too far the other way and name them things like “shaper” ugh. This is the Nerdarchy not the Neanderthal-y

I have no issue with people who play them with simplified names or cultures within the a game that name them as such. I didn’t want my version of psionics to use sightwords you could find on a first graders school list to name the different psionic disciplines.

Below I have included some names by which they may be known, feel free to use these or one’s of your own making.

In the end it is simply the name game to select what you think captures the feeling and concept of the discipline. Pick a name off of what works for your character, not the mechanics

Mind Alteration: Whenever you use a Telepath or enchantment spell and the target would know that you cast a spell on them after the spell has ended you may choose to alter their perception to ignore the spell cast against them. Similar to the enchant school’s ability

I considered the power and usability of each power list as part of the greater whole of the class features and class effectiveness.

Each discipline has thematic spells that show what the class is when one takes into consideration both the spell list and class features of the individual disciplines.

Below is the list of all of the discipline’s. They are separated by level to make it easier to choose powers for your character.

A finale reminder: The spells were chosen for each discipline based on what they can do, not by their name. I also chose the spells without any consideration to the other existing spell casters. I chose what fit mechanically into my vision of the disciplines

I found Cognizant to be the most difficult to construct a spell list for because most of the spells sound like a poor match based on their name but the mechanics of certain spells lend themselves to altering the abilities of the cognizant in a way that can be re-skinned to reflect the prophetic might of this particular discipline.

Feats for the 5e Homebrew for D&D

Psionic Initiate would simply include the Psionic custom class in the list of spell casting classes to choose from when selecting this 5e feat. From there it would work exactly the same as it does in the PHB.

Psionic Tattoo You can scribe temporary conduits onto yourself and other psionic characters. The tattoo lasts a maximum of 1 week unless the psionic tattoo artist decidesto end it before the week is over. A tattoo can contain any number of powers as long as the total amount of drams the powers cost is less than or equal to the character’s levels in psionics (cantrips count as 1 dram for this calculation).

When the Psionic character places the tattoo on the target and selects the powers the recipient gains a reduction of metamagic cost of the powers linked to the tattoo. That reduction is 1 spell point off of the total points spent on metamagics when the spell is cast. An example is drawing a psionic tattoo as a 5th level Telepath. They select the power: Nondetection (5 drams in total so they can not add another power). When they later cast Nondetection the power can be augmented with a metamagic ability that costs 1 dram and it will instead cost 0 drams to alter the power.

Just in case I have not clarified yet. A character may only be the recipient of 1 psionic tattoo. An attempt to place a second tattoo will overwrite the previous psionics tattoo

You may have a number of tattoos active equal to your Wisdom modifier +1, to a minimum of 1

Spell Shaper- You excel at twisting spells to suit your needs. Your Wisdom, Intelligence, or Charisma increases by 1, you gain 2 spell points, and you gain 1 Metamagic ability.

Mind over Matter- You have trained your mind to exceed your bodies capabilities in times of need.

As a reaction you can spend 1 dram(sorcery point) to gain one of three benefits which last as per Concentration, for up to one minute.

Note: This cannot give you expertise, nor will it allow you to add your proficiency bonus more than once.

When compared to Skilled, where you simply gain 3 skills, Mind over Matter has better range of application but costs to do it.

Tip: Combine this with the 2nd level spell Enhance Ability for some amazing feats of strength and dexterity where once was an average psionics based PC. 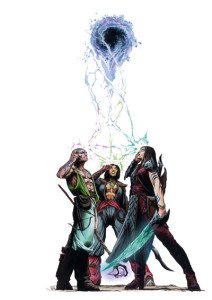 Shared Minds– When this feat is selected the character gains the ritual: Shared mind.  The ritual, when completed, allows you to share the burdens of concentration with another intelligent being.

You must be within touching distance of the intelligent being (Int greater than 5) and they must be willing before the ritual will work. It lasts 1 day or until you perform this ritual again, whichever is shorter. While active you gain the following

Fortress of Adamant Will- Your intellect,persona, and consciousness reside within a mental fortress constructed of adamant will.

Remember to always pack your character sheet and Stay Nerdy!

Go Wild with Beasts in Your 5E D&D Games